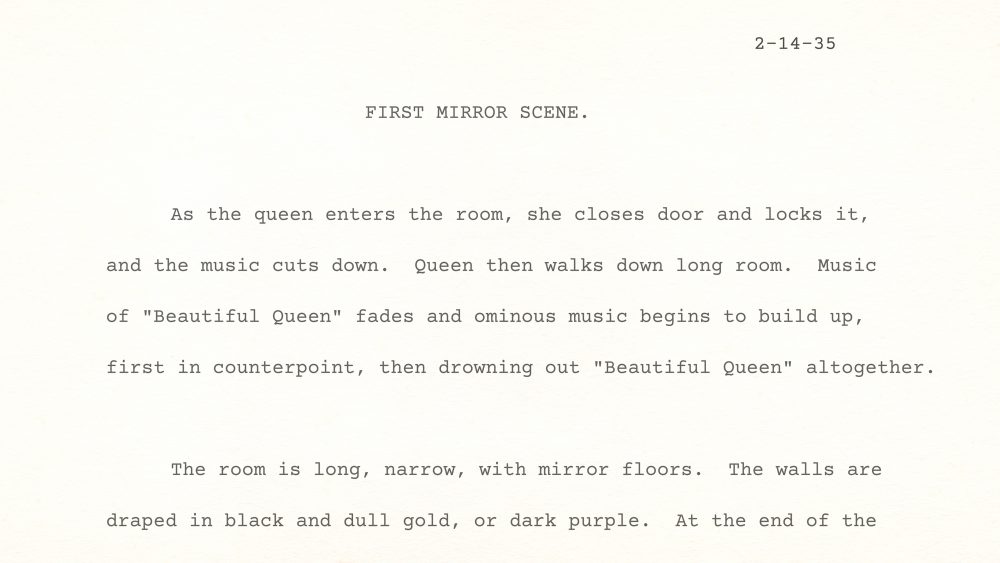 The is a continuity of the first “Magic Mirror” scene, describing the approach to the mirror room, the physical mirror appearance, and how the mirror works.

The story man references “mirror shakes his head like the Boogey Men, ending in a series of Russ Powell pops… Russ Powell popping sound with his lips.” I’ve located and watched several movies with the actor Russ Powell (the movies are all free on YouTube), but I can’t locate any “pops” or “popping of the lips,” so I have no idea what the story man is talking about in this regard.

The latter half of the document has a lot of rhyming dialogue from the mirror, which technique was kept throughout the story process. It also contains Queen dialogue, and even references her name as “Queen Grimhilde.”

In previous outlines, the upset Queen later smashes the mirror into pieces, which doesn’t happen in the final film. Here, it’s revealed why: if the mirror is smashed, the Queen turns ugly — she gets her beauty from the mirror. Doesn’t really make sense in the story, so I assume that’s why this derivation of beauty was left out of the final final film, too.

Amusingly, in this document, they developed the Queen’s character as quite the serial killer of beautiful women!