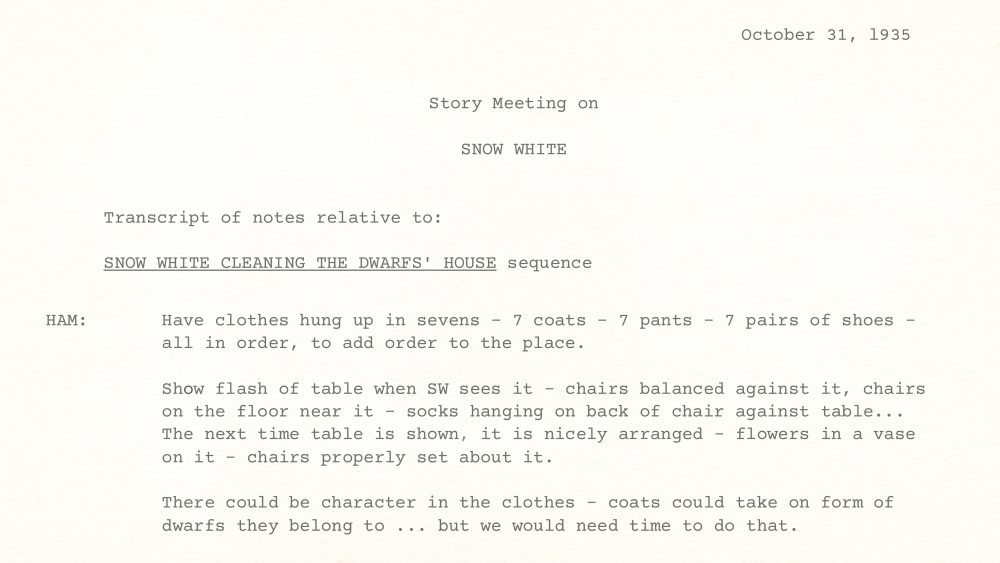 The is the first story meeting after a 10 and 1/2 months hiatus, and not a whole lot of Snow White story work was completed during that time.

It’s rumored that during this time, Walt had another nervous breakdown and subsequently went on a 6-week trip to Europe to get away.

At any rate, we pick back up with the story by Walt and gang developing the house cleaning sequence.

It’s very important work that they’re doing here, very typical Disney story work, developing what I like to call “the businesses” (a series of actions, other than dialogue, that is performed by the actors).

Walt explained it’s effect on page 2: “If we get more things like clothes treatment, it makes picture cute and fanciful, instead of just straight business …. we must gag it up.”

Emphasize, stomp, stomp, “instead of just straight business …. we must gag it up.” That totally sums up why Disney story is so entertaining, all the little gagged up businesses. Nothing direct. Somebody doesn’t just walk from A to B; they walk in an indirect “business” way, preferably with gags interspersed.

After the hiatus, it’s good to have Walt back, in full contributing form: