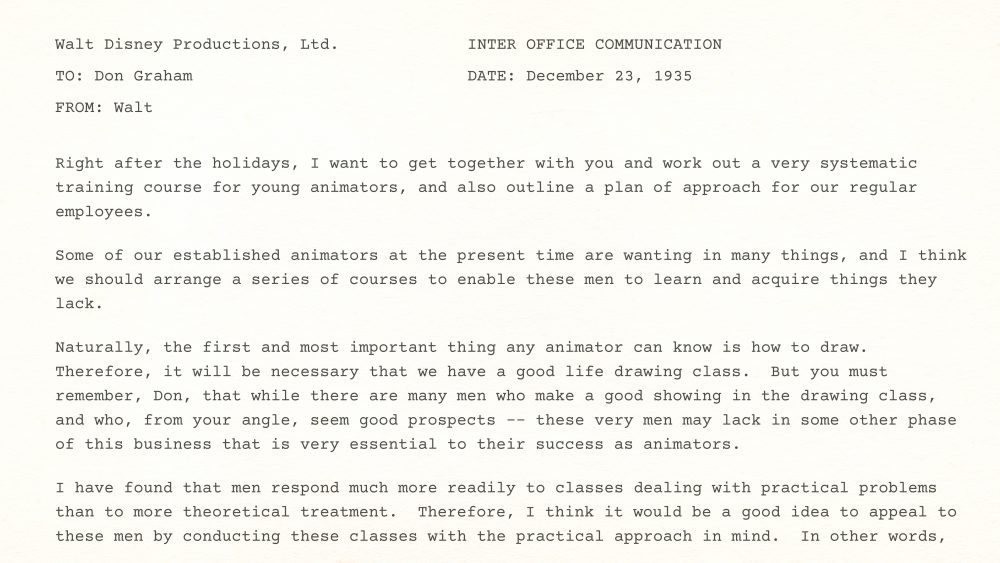 This is a fascinating Disney historical document, possibly portending Walt’s success more than any other document I have.

It shows the absolute high level advanced thinking of not only Walt himself but also what he demanded/expected of his workers — and it all comes from a “jumble of [his] thoughts” because Walt was “convinced that there is a scientific approach to this business.”

And thus, Walt started using the scientific approach to advance his art form. Remarkable! It was the primary reason that he was able to leapfrog everyone else in this business, possibly for all time.

Although the majority of the memo discusses the future advancement of animation skills, Walt does does spend some time addressing story:

“Ability to think up gags and put over gag.”

Walt also addresses the study of music: “a realization on their part of how primitive music is, how natural it is for people to want to go to music — a study of rhythm, the dance — the various rhythms that enter into our lives everyday — how rhythmical the body really is — and how well balanced the body really is.  That, in itself, is music.  In other words, it could be music in the body.  We dance — we can keep time to rhythm without ever being taught — a baby does it — cannibals do it.  But fancy dancing or tricky stuff, we have to learn.  There are things in life that we do to rhythm that come natural to us.  Notice how rhythmical an action like pounding with a hammer is!”

And dialogue: “phrasing and rhythm of dialogue, moods and character of dialogue, expressions, gestures, directness, use of the eyes, eyebrows, mouth, head, arms, body, tongue, inhalation and exhalation, and various other aspects that have to do with the successful picture-ization of dialogue in the cartoon.”

The document speaks for itself, and I strongly encourage anyone interested in story, in animation, or just interested in the scientific advancement of an art form to read the document, which I’ve posted below: