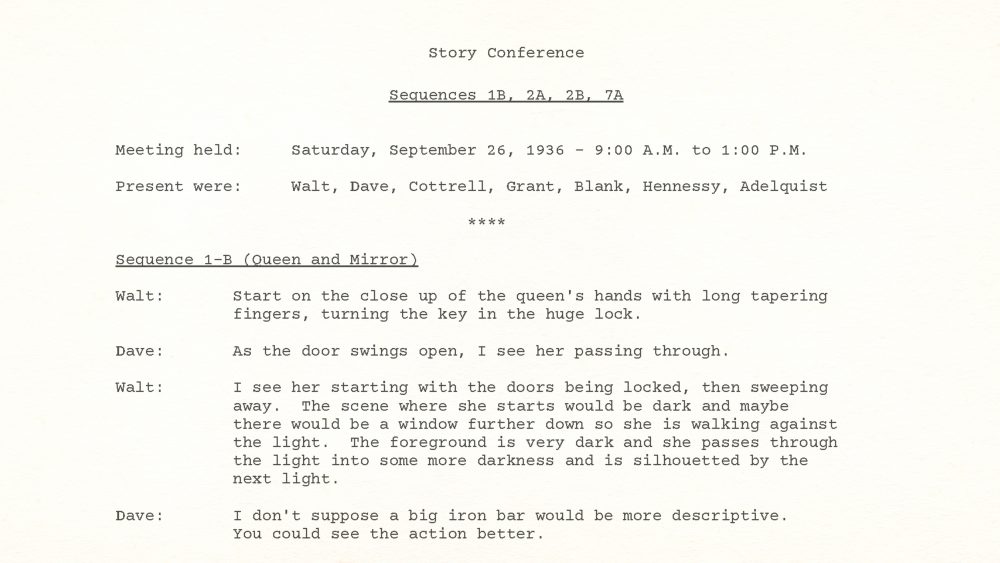 Walt Disney Snow White Story Conference SEQ 1B, 2A, 2B, and 7A

This is a very fruitful meeting — a lot was accomplished, mostly clearing up motivations behind actions.

Participant ‘Dorthy Ann Blank’ is one of the few women in the story department and rarely heard from.

She came to Disney through a connection with Hal Horne, who had sold Disney the infamous Gag File, which file I’ve been trying for years to locate but have come to believe, after several discussions with the late Dave Smith, that Dave had thrown it into the trash years ago as irrelevant but was didn’t want to admit such (because maybe it wasn’t so irrelevant).

Anyway, Dorthy was brought into the Disney Story Department to fill a position Walt had just previously posted by memo:

“A thing we are sadly lacking in the Story Department is somebody who would be classed as a reader, capable of giving condensed versions of the stories, which could be read in a few minutes. This person should be capable of making adaptations to show the possibilities of stories for our use. Let’s see if we can find someone to fill the spot. This person would have to be someone who knows showmanship angles, and would also have to know what we can do with a cartoon.”

Dorthy worked on several Snow White scenes and was purportedly the model inspiration for The Evil Queen; I’ve posted her picture directly below, and there is a resemblance.

The following attached PDF Disney Story Meeting discusses the ‘Queen and Huntsman’ sequence. As usual, I won’t recap because it’s best that you read/learn from the primary source.

Click on the below image to read the document as a PDF.