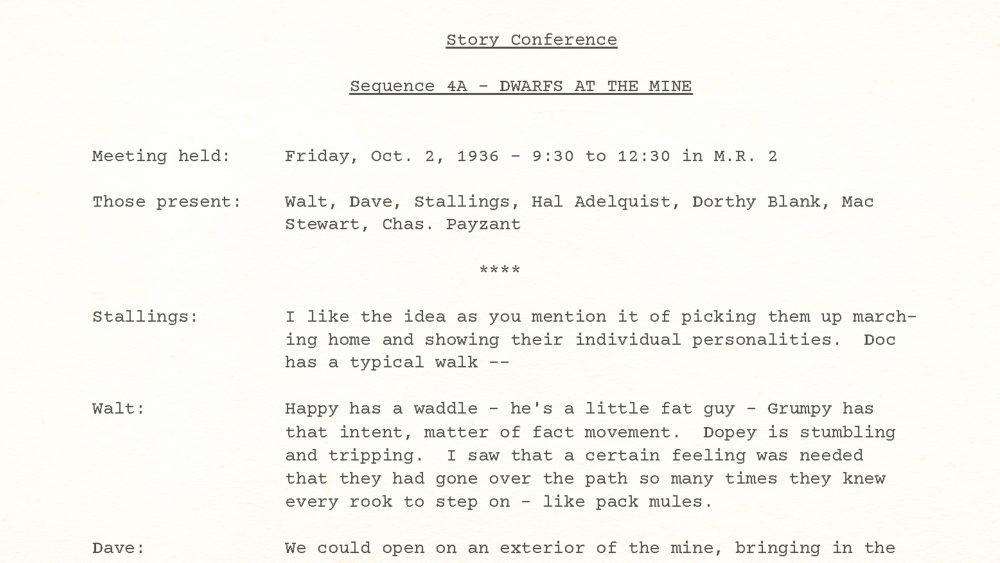 This is a really good story conference to study. There’s so much in it, both revealing how Walt’s story mind and story department worked.

As a bonus, it reveals how he integrates gags with music — not to overwhelm when they have animated music going, he pulls back on the gags.

The gags are still there, though — mostly in the non music sequences. My favorite is “Sleepy reaches up and pushes the [quitting time clock] hands up five minutes. Owl wakes up and pushes it back. This is a contrast and conflict gag, the basis of entertainment: Sleepy wants to quit and go home early but Owl’s job is to keep the clock on time.

Director Dave Hand always adds a lot of gag suggestions in these meetings, usually topping an already existing gag. In this meeting, Hand offers, “For a top, when the cage starts the other way, it might throw dust in Dopey‘s face.,” but Walt shot it down.

Interestingly, Walt was no longer taking director credits on his films, but leave no doubt, he was directing this film (as lead, mind you). Just read these directions if in doubt:

“Walt: The rest laugh to the interlude. Don’t show them laughing, just start it and overlap on the interlude to Sleepy coming in. Use part of it for Sneezy as they laugh at him. He sort of takes it with the diamond on his head (spinning). O.S. laughter on the picture of Sneezy with the diamond on his head. Break there and use part of the laughing interlude with Sleepy – coming out with the mine car. He starts to prod the mule on the dig-dig-dig-dig. We could have the other guys pick up o.s. He slaps with the reins. Get that mule click (with the tongue).”