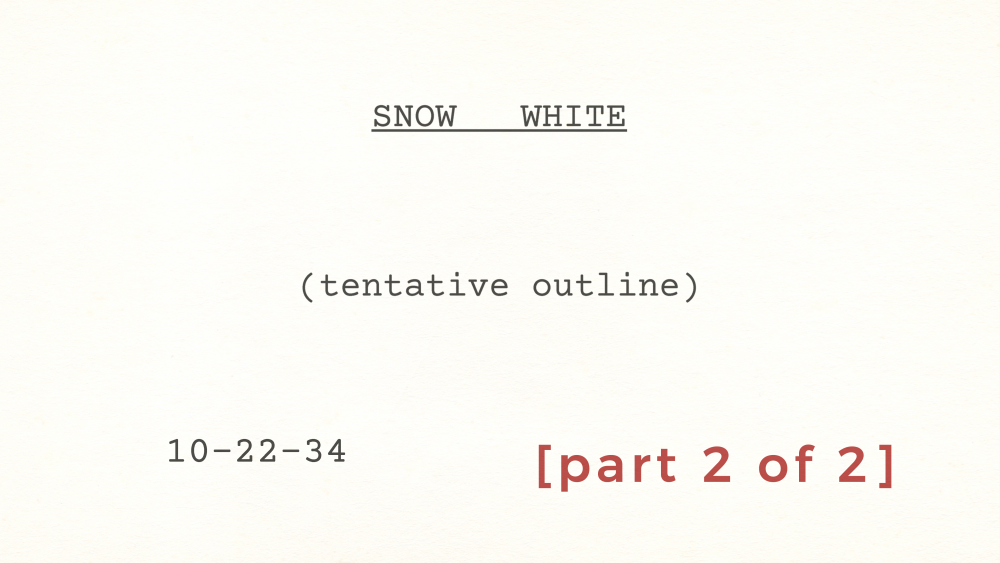 This is the second part of the October 22, 1934 Snow White Tentative Outline, the part that solicits gags for various scenes. At this early date, my guess is this solicitation is only directed toward story department employees and some animators. As time progresses, though, gag solicitations are definitely expanded toward wider and wider audiences, eventually to all studio employees, including the janitor. I think this is because Walt recognized how important the gags are in his success.

Make no mistake, visual gags are indeed an integral part of Disney’s success. If you edit out the gags from his animation, the footage becomes far less captivating (I’ve done it as a test, and otherwise captivating footage becomes monotonous and downright boring).

I believe this is because gags tickle our senses, perk us up, create alertness in our minds as we try to figure-out and process the gag. It likely has to do with the way our mind is structured for survival, where we ignore and dismiss the known yet unduly focus on the unusual. You can see it in household pets, where reoccurring noises don’t phase them, but if there’s a new, different noise, they perk up, on guard, until they process the noise as safe or danger.

Walt used visual gags extensively throughout his career. Mary Poppins, which was a pinnacle toward the end of his life, is loaded with them, most of which were recycled from earlier decades.

I love gags, and whenever I read these old gag solicitations, I often come up with my own offerings, and I always wonder if they would have been accepted and incorporated.